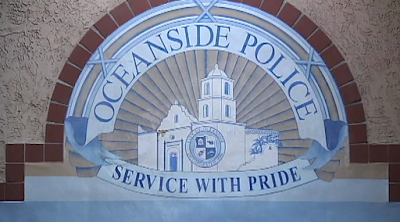 On July 7, 2015 at 4:13 p.m. Oceanside Police Department Communications Center began receiving phone calls regarding several residential burglaries >>>
in the eastern area of the city near North Santa Fe Avenue and Melrose Drive. Officers arrived in the area and determined there were at least five residential burglaries and one prowling incident. At one point residents in the area reported a burglary in progress. Officers caught and arrested two juveniles with the assistance of the Sheriff's ASTREA helicopter. The victim residences were in the 1900 block of Sagewood Drive, 1400 block of Sunbright Drive, 1400 block of Powell Road, 1300 block of Hollins Road, 1400 block of Crestview Drive, and 5200 block of Sable Court.


Much of the property which was stolen by the juveniles was recovered hidden in the area including several guns.

The activity resulted in 109 phone calls to 911 call takers within one hour.
Oceanside Property detectives were notified and will be conducting follow ups today in order to identify other outstanding suspects.


www.TanYourHideInOceanSide.com
at July 08, 2015
Email ThisBlogThis!Share to TwitterShare to FacebookShare to Pinterest